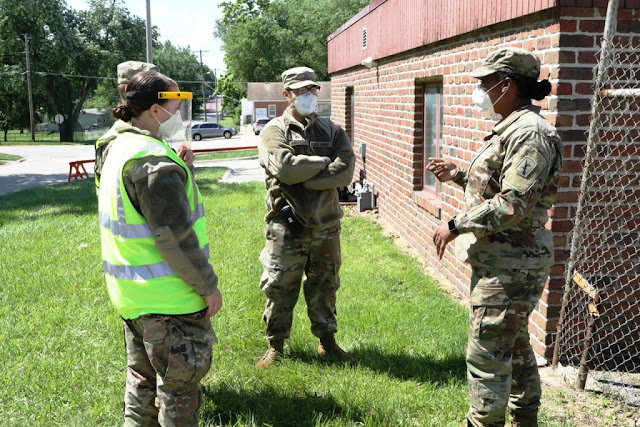 After months of support, the Nebraska National Guard is transitioning its COVID-19 testing mission to civilian health care workers throughout the state.

As of July 1, full Nebraska National Guard testing teams are no longer activated to provide testing throughout Nebraska, but a small group of soldiers and airmen is still activated to provide training and knowledge to hos pitals for the Test Nebraska campaign. Another small team is supporting the Omaha area.
A man puts on full body protective gear. 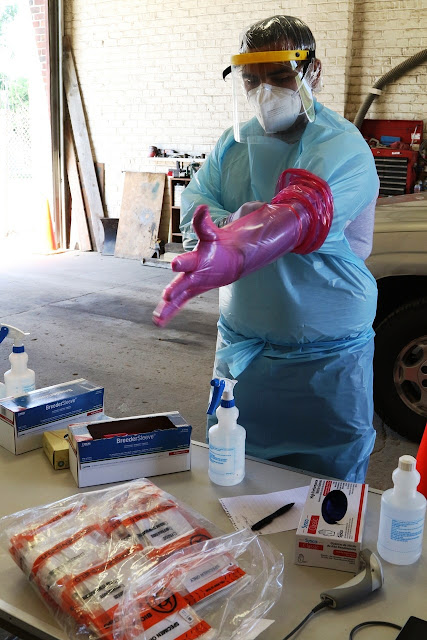 ''The transition has been going very well,'' said Army Maj. Angela Ling, the coordinator between the Nebraska Department of Health and Human Resources and the Nebraska National Guard. ''The current process is: if a hospital/clinic/health department is interested in running a Test Nebraska site, they contact DHHS, and together they get a contract signed. Once the contract is signed, my team receives the contract, and we call the hospital directly.''

''When we call the hospital, we work out their training needs, test kit, and [personal protective equipment] delivery and scheduling plan,'' Ling added. ''Once these details are solidified, we send an update to the Test Nebraska team to get them loaded into the scheduling system.''
The transition was put in place after several hundred Nebraska National Guard soldiers and airmen were activated in late March to support testing teams that traveled across the state for weeks on end.
Three Nebraska National Guardsmen wearing face masks stand in grass.
''The civilian hospitals are doing a wonderful job with this transition,'' Ling said. ''They are eager to support this need for their communities.''

Over the past few months, the guard testing teams have been able to provide Test Nebraska sites wherever needed, including nursing homes, corrections facilities, meat processing plants, smaller towns and large cities alike.

The teams have helped to collect more than 80,000 samples for testing during the COVID-19 pandemic, supporting 53 counties and all 19 health departments.

''It's been a great honor for the governor to entrust his confidence in Nebraska National Guard soldiers and airmen to provide the testing for COVID-19 these past few months,'' said Army Maj. Gen. Daryl Bohac, Nebraska adjutant general. ''I couldn’t be more proud of the team we have had on orders to provide the support and capabilities for such an important mission. It goes without being said we have great soldiers and airmen in the state of Nebraska that are ready to respond at a moment's notice.''

A woman in protective gear stands next to a car.
Throughout the pandemic, the guard has always pushed to ensure the safety of the soldiers and airmen supporting the COVID-19 response missions as well as their fellow citizens.

''I have three directives: [to] preserve the health of the force, protect our families in our communities and stay ready,'' Bohac said. ''If we take care of everyone, we take care of the other two, and that’s the direction we’re following.''

As the mission begins to wind down, the soldiers and airmen know that their hard work hasn’t gone unnoticed, and they are proud of their contributions during this time.

''Our team has enjoyed working with numerous agencies and filling a need for the state during this pandemic,'' Ling said.